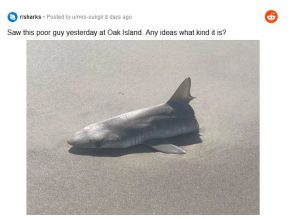 The decomposing remains of a shark sliced in half has washed up on a beach, raising questions about what bigger predator may have attacked it.

A Reddit user posted the gruesome photo of the decomposing body while revealing he saw ‘poor guy’ washed up on Oak Island, Canada, which left users theorising what happened to the sea creature.

One user wrote: “This was not a boat accident! This wasn’t any propeller.

“This wasn’t any coral reef. And it wasn’t Jack the Ripper. It was a shark. [A] Great White shark.”

Another joked: “POV: He finally reached his tail after chasing it”

Another person suggested that an even deadlier shark was responsible for the attack, writing: “Another shark would do that all day every day.”

This type of shark that washed up on the beach is not officially known but many said it looked like an ‘Atlantic Sharpnose’ due to its narrow nose and dark backside of the dorsal fin.

Atlantic Sharpnoses are typically a smaller type of shark with a streamlined body, making them vulnerable to bigger prey.

According to the NOAA Fisheries website, Atlantic Sharpnoses are commonly found along the western Atlantic in New Brunswick, Canada, through the Gulf of Mexico and eat small fish including menhaden, eels, silversides, wrasses, jacks, toadfish, and filefish.

Saxon is a prolific writer with passion for the unusual. I believe the bizarre world is always exciting so keeping you up to date with such stories is my pleasure
Previous Man’s Forearm Amputated After Botched Bicep Curl Left Him With Flesh-Eating Bug (Video)
Next Husband allegedly bites off his wife’s nose in her father’s house then posts suicide note on Facebook after he was called out (graphic photos)