An unidentified Chinese national has been spotted in Kilimani Kenya, begging for money to return to her country.

According to Kenyans.co.ke, the Chinese woman has been seen camping along Ring Road Kilimani for several days, begging Kenyans raise funds for her to purchase an air ticket so she can go back home.

The report also claimed that the woman was in dire need of assistance because she had gone bankrupt while in the country.

A report by Kenyans showed the woman who is yet to be identified had an open basket and a banner detailing her pay bill number and a Kenyan phone number. 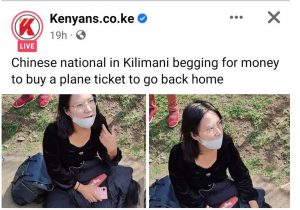 “If you want, help her. She just asked for help. All you do is just send the money,” the other Chinese lady rallying contributors pleaded.

The lady’s counterpart claimed that the woman was in dire need of assistance because she had run bankrupt while in the country.

However, a few Kenyans were doubtful and said that she should seek help from the Chinese Embassy. They wondered why she was pleading on the roads, yet she could quickly be repatriated.

But her friend defended her, insisting that they were stranded, nonetheless. 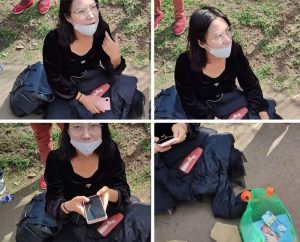 “What is wrong with a Chinese asking for money? She does not have a job? We do not have jobs. I just want to help her,” she insisted.

“But she has two expensive phones. Can you sell me one phone?” a curious onlooker asked in the background.

She claimed that she had no other means of help than reach out to generous and kind Kenyans. She also clutched her phones and other property, wary that the situation might worsen as others advised her to watch out for her safety.

No one knows yet whether this is for or just a kind of skit for social media which this Chinese woman may have organized with her friend.

Saxon is a prolific writer with passion for the unusual. I believe the bizarre world is always exciting so keeping you up to date with such stories is my pleasure
Previous Indian Man Stabs Live-In Partner To Death, Calls Cops, Waits For Arrest
Next Georgia Sonic workers find large snake behind deep fryer