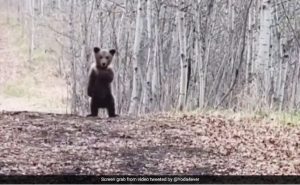 People search the internet for videos that can put them in a lighter mod. One of such videos is this one that shows a bear cub dancing like crazy in the forest.

The video shows the excited bear cub also hopping around after standing on its hind legs. The 13-second clip shows him dancing like nobody’s watching.

The short clip has become immensely popular on the internet, with millions of views already.

“Cute for now….but it really looks like he’s challenging the photographer,” tweeted another.

The bear cub has become an internet sensation even without being aware.

Saxon is a prolific writer with passion for the unusual. I believe the bizarre world is always exciting so keeping you up to date with such stories is my pleasure
Previous South African Club banned for life after beating Opponent 59-1, and 41 of these were own goals
Next Indian Man Stabs Live-In Partner To Death, Calls Cops, Waits For Arrest