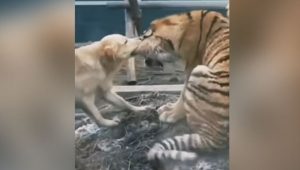 A video which is making the rounds on the internet shows a massive fight between a dog and a tiger.

The video which was shared by an Instagram page named Animals Power shows a golden retriever dog trying to bite off a tiger’s ear. However, it’s unclear if this golden retriever realizes that it is fighting with a huge cat, and one of the most deadly ones, or two.

The video also shows a lion sitting nearby, looking to break up their fight but staying away since it doesn’t want to get involved. In the meantime, the tiger is clawing at the dog, but the dog has a firm grasp on the tiger’s face and ear.

“Dog Vs Tiger,” reads the caption.

The video is supposed to be captured at a zoo because a few visitors can also be spotted witnessing the unexpected scene in front of them.

This unusual fight has stunned viewers all over the internet. Instagram users have swamped the post’s comment area with surprising remarks.

“Dog doesn’t let go it’s got a chance, but the moment he lets go it’s over,” commented one user.

A second user wrote, “Dog gonna mess around and make tiger prove himself then we gonna hear the comments Iike. Awwww, so sad, you guys are mean, you’re a savage, etc.”

Saxon is a prolific writer with passion for the unusual. I believe the bizarre world is always exciting so keeping you up to date with such stories is my pleasure
Previous Leaked audio recording shows radio host telling colleague she’s a ‘f***ing, fat, bitch’
Next Watch: Old Man Risks Being Swallowed In Quicksand To Fetch Drinking Water