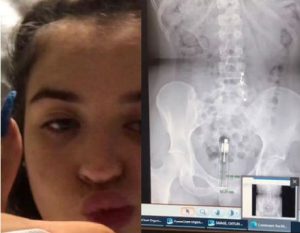 She thought it was fun so she posted the story by herself on social media.

Caitlin Savage went viral on TikTok after she shared a slideshow of photos showing herself in a hospital bed with x-rays showing the sex toy buried deep in her anus.

The student nurse captioned the clip: “Worst day of my entire life. Lesson of the day: don’t put things where they shouldn’t go.” 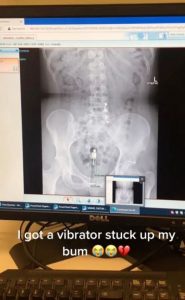 Viewers flocked to the comments demanding to know how it happened, so she posted a follow-up video.

In the video, she explained: “Basically, what happened was, me and my boyfriend were sex — lush and we decided to put something up my bum.

“I had to go to the hospital. It was mortifying. I’ve never been more embarrassed in my entire life. I couldn’t talk to the doctors about it.

“Like I’m a student nurse at the minute and now when I think about it it’s not even that bad what I was saying, but I was just so mortified. 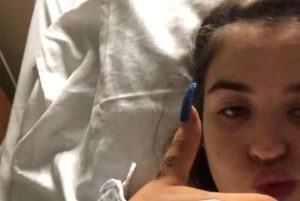 “I was stuck in hospital for ages and then they asked if I’d wanted it back. They gave me it in a black bag and I was like no, thank you.”

One person wrote: “If it makes you feel better my mum works in X-ray she’s seen a boy with a round door knob stuck up there.”

Saxon is a prolific writer with passion for the unusual. I believe the bizarre world is always exciting so keeping you up to date with such stories is my pleasure
Previous Toddler dies after being left in the family’s car for hours
Next Fans caught while having sex in back row at Blue Jays game (graphic video)