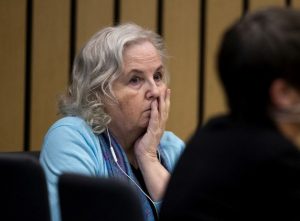 This came as a shock to those who knew the couple before the shocking incident. There was no indication that such a gruesome crime was likely going to happen among them.

Nancy Crampton Brophy, a writer of romantic thrillers, was sentenced to life in prison for shooting husband Daniel Brophy to death in cold blood, and it came as a surprise ending for everyone who knew them.

In her 2011 essay “How to Murder Your Husband,” romantic-thriller author Nancy Ceampton Brophy provided a list of five possible reasons why a wife might kill her spouse, reports ENews.

No. 1 was money. The next, she wrote, he’s a “lying, cheating bastard.” Third option, she continued, he “fell in love with someone else.” Fourth, as she put it, was “abuser.” And lastly, Nancy wrote, “It’s your profession,” as in you “possess both skill and knowledge” and “have the moral ambiguity necessary to carry it off.” 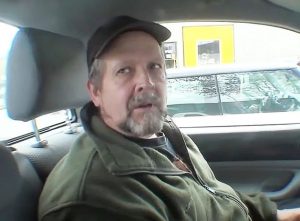 Prosecutors said No. 1 was the motive for Nancy when she shot and killed her husband of 27 years, Daniel Brophy,  in 2018.

“I spend a lot of time thinking about murder and, consequently, about police procedure,” Nancy, a self-published novelist, wrote in her now infamous essay. “After all, if the murder is supposed to set me free, I certainly don’t want to spend any time in jail.”

A few weeks after she was found guilty of second-degree murder, on June 13 the 71-year-old was sentenced to life in prison with the possibility of parole after 25 years.

Nancy maintained her innocence throughout, her defense countering each of the prosecution’s points with her side of the story. But she did not get the ending she was hoping for.

According to details provided at the trial, Nancy met Daniel at the Oregon Culinary Institute in the ’90s when she was a student and he was her teacher. They married in 1999.

“I love story-telling,” Nancy wrote in the “About” section of her website, which she last updated in 2018. “My imaginary friends have rich, larger-than-life lives encompassed in a few hundred pages with definite beginnings, snappy middles, and above all, happy endings. My personal life is never as clearly defined. Beginnings are hard to locate.” 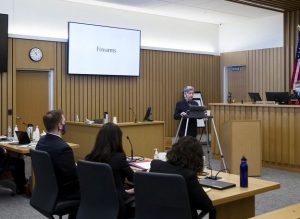 The author of titles such as Hell on the Heart and The Wrong Lover lived with her chef husband in the Northwest where, she explained, there were “chickens and turkeys in my backyard, a fabulous vegetable garden which also grows tobacco for an insecticide and a hot meal on the table every night.”

“I can’t tell you when I fell in love with my husband,” she wrote, “but I relate the moment I decided to marry him. I was in the bath. It was a big tub. I expected him to join me and when he was delayed, I called out, ‘Are you coming?'”

“His answer convinced me he was Mr. Right,” she continued. “‘Yes, but I’m making hors d’oeuvres.’ Can you imagine spending the rest of your life without a man like that?”

She noted that they’d had their “ups and downs, more good times than bad.” In another blog post since made private on See Jane Publish, she wrote it was the “second (and final—trust me!) marriage” for both of them.

(For more on this, see ENews)

Saxon is a prolific writer with passion for the unusual. I believe the bizarre world is always exciting so keeping you up to date with such stories is my pleasure
Previous ‘I have lost nine children through miscarriages – Actress, Sharon Stone
Next 16-year old boy’s eyes plucked out by his ’employer’ in Bauchi (photos)