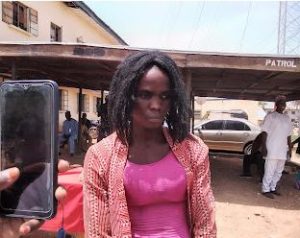 Police in Adamawa State, Nigeria, have arrested a 25-year-old man over alleged criminal trespassing and attempting to commit theft.

Jika John, who is from Michika Local Government Area but resides at Sabon Pegi in Wuro Chekke, Yola South LGA, in Adamawa State, was arrested on Monday, June 6, 2022.

He was said to have dressed as a woman and gained entrance into the College of Nursing and Midwifery Yola to steal gas cylinder from the female hostel.

Jika was apprehended following a distress call from the College.

Speaking to newsmen at the headquarters of the Police Command, the Suspect Jika claimed that there was a girl in the school who asked him to pay her a visit in order to have sex.

The suspect said that he made an arrangement with the girl on Sunday, June 5, 2022, to meet on Monday when all her roommates will be out of the hostel.

When Monday came, he wore female clothes so as to have easy access to the hostel.

Jika said that he was apprehended by security while on his way to the hostel between 7:30 to 8:00 pm.

He insisted that his plan was to go and have sex and not to steal.

Fielding questions from newsmen, the OC Crack Squad of the Police Command, CSP Ahmed Danjuma Gombi, said that it was not true that he was in the school to have sex with a lady but to steal gas cylinders in order to sell it.

Saxon is a prolific writer with passion for the unusual. I believe the bizarre world is always exciting so keeping you up to date with such stories is my pleasure
Previous Indian Couple Begs For Money To Pay “Bribe” To Hospital For Dead Son’s Corpse to Be Released (Video)
Next Watch As Duck Plays Hide And Seek With Tiger Sneaking Up On It (Viral Video)