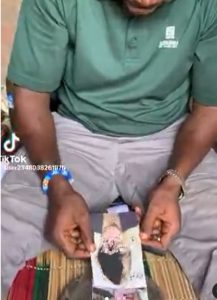 The is one of the trendy moves made by people who seek to make money through ritual means. So some native doctors and self acclaimed chief priests now advertise their work on social media. Here is the story of a famous TikToker who is a native doctor.
The native doctor shared videos of him tying up pictures of a white woman and a man for a ”client.”’
Though what he planned to achieve with this is still unclear, he muttered some incantation during the ritual.
A quick search on his TikTok account showed that he has more videos of him carrying out other “rituals” in his shrine. There were also people in the comment section of his post, telling him they want to “lock their clients for money”.
It was gathered that the essence of tying up people for clients is to ensure that whatever relationship the client has wit such people being tied, whether white or black, nothing will make it fail until the client has made so much money from them. That’s the belief which drives young men to such native doctors.
The exact country of the native doctor could not be identified from the video but it looks like he is somewhere in Nigeria. His phone number is even on display on the screen of his videos as that was how he got his clients.
Watch the video below:

Saxon is a prolific writer with passion for the unusual. I believe the bizarre world is always exciting so keeping you up to date with such stories is my pleasure
Previous Woman horrified as she wakes up to man hovering over her bed demanding money and s3x
Next Four-year-old boy asked mum not to kill him before she drowned him in bath