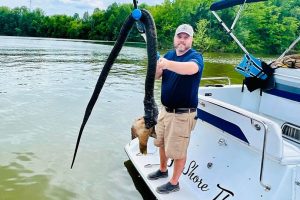 A woman has vowed never to swim in a lake again after what she initially thought was driftwood turned out to be a massive watersnake that had apparently choked to death on a fish.

Amber Conley and Brad Walton were boating on Brookville Lake in Union County Indiana, USA when they spotted the dark mass in the water and fished it out.

What they retrieved from the murky waters was however, a snake – five foot long by Amber’s estimate.

“He leaned over and said ‘it’s a snake eating a huge fish!’. We didn’t believe him so he grabbed the buoy hook and scooped it out,” Conley told local media. “It was dead and smelled awful!”

“If we could have stretched it out, it would have been almost as tall as me and I’m 5’2,” Conley said. 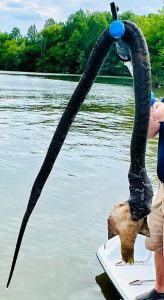 Photos from the scene show the snake’s mouth stuffed with a large fish. Amber believes the fish’s sharp fins were caught in the serpent’s mouth and it likely was unable to swallow the fish or spit it back out.

Despite her love for the water, in her original Facebook post, she wrote: “Side note: I’m never swimming in the lake again. BOAT 4 SALE! While fueling up today, we came across a dead snake that had choked on a huge fish”

“From the photo, our reptile team thinks it’s a Northern Water Snake, Nerodia sipedon (most likely). They are non-venomous and usually smaller, 3’ total length is about average,” Angela Hatke, the Digital Engagement and Publicity Manager at the zoo said.

“They will stay well away from you in the water so go boating stress-free!”

Saxon is a prolific writer with passion for the unusual. I believe the bizarre world is always exciting so keeping you up to date with such stories is my pleasure
Previous Bees kill primary school pupil in Nigeria
Next Couple hailed by passers-by while having s3x with their window wide open (viral video)