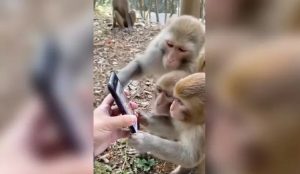 A video has surfaced online showing the moment a group of monkeys were using a mobile phone like it is an everyday activity.

The video which was shared on Twitter has since gone viral. It shows the monkeys looking at a smartphone screen and also scrolling through what appears to be a social media account. The video was shared last year, however, it has now resurfaced again and left the internet in splits.

The video opens to show a man holding the phone while two monkeys appear to be engrossed in it. A third is also seen joining in and getting a view of the screen. Moments later, one of the monkeys then holds the phone and starts scrolling the screen in an intriguing way. Another small monkey is also seen pulling the elderly monkey to get its attention and divert it from the gadget.

The video was aptly captioned: “Craze of social media”. It has taken the internet by storm. While some users called the video “cute,” others simply said that the Monkeys too are addicted to smartphones.

One user said, “Hilarious and watch curiosity and facial expression. Aping us.” Another said, “We are spoilt humans, we are spoiling Animals too.” A third jokingly added, “Humans are enemy of humans, they will one day bring this movie ‘planet of apes a reality.’” “Ha ha ha ha ha, the social media effect reached to them also. How seriously monkeys are chatting,” commented fourth.

Saxon is a prolific writer with passion for the unusual. I believe the bizarre world is always exciting so keeping you up to date with such stories is my pleasure
Previous Wife Throws Boiling Water on Sleeping Husband’s Genitals As She Accuses Him of Dreaming of Another Woman
Next Video: Sea Lion Almost Attacks Little Girl, Internet Slams “Content Hungry” Parents