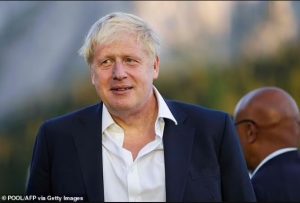 British Prime minister,  Boris Johnson has welcomed the decision to ban transgender women from competing in women’s swimming, saying women cannot be born with a penis.

The Prime Minister reaffirmed that he supports FINA’s bar on transgender athletes who have gone through male puberty from competing in women’s events.

The international swimming federation announced that it was changing its policies so that transgender women can only compete in the organisation’s female races if they have completed their transition by the age of 12.

Instead, an ‘open category’ will be set up for transgender athletes to compete against one another at events, including the World Aquatics Championships, World Swimming Championships, and the Swimming World Cup.

Asked about FINA’s ban, Mr. Johnson said: ‘I haven’t studied it in detail but I see no reason to dissent.’

After having the policy summarised to him, he added: ‘That follows from what I’ve previously said.’

Mr. Johnson was also asked if a woman can be born with a penis, amid a debate in some quarters about anatomy and gender.

‘Not without being a man, that’s my view about that,’ the Prime Minister replied.

Speaking to reporters travelling with him during his visit to Rwanda, he was asked if he thinks there is a difference between being a woman and a trans woman.

After pausing to think he said: ‘Yes.’

He added: ‘Look it’s very, very important that as a society we should be as understanding of everybody else as possible. I’ve always stood for that.

‘I think I’ve spoken of three concerns I’ve had in the past. They are to do with the age at which you can (become) Gillick competent to transition, the question of safe spaces for women, and the difficulties you have in sporting competitions.

‘These are all very difficult problems and you have to be very, very sensitive.’

LGBT charity Stonewall criticised the line of questioning, suggesting the Prime Minister would welcome it as a ‘distraction’ from the political turmoil.

Campaigns associate director Sasha Misra said: ‘The real question that should be on the nation’s lips is this: at a time when we are living through multiple national crises, why are journalists squandering valuable interview time by asking the Prime Minister leading questions about a tiny, vulnerable minority?

‘We know that the majority of the public feel supportive and compassionate towards trans people, who are their family, friends and neighbours.

‘All that is achieved by this kind of media coverage is that trans people feel less safe in their day to day lives, and the public has less opportunity to hear from the government on the pressing political matters of the day.

‘The Prime Minister might welcome the distraction, but he should not be fooled into thinking that anti-trans talking points will win votes.’

Saxon is a prolific writer with passion for the unusual. I believe the bizarre world is always exciting so keeping you up to date with such stories is my pleasure
Previous Daughter catches her mother in bed with her baby daddy at her apartment (video)
Next East London tavern survivor, 17, who lost two friends ‘rose from the dead’