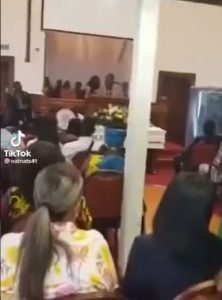 A lady caused chaos at a funeral by saying the last things the deceased allegedly told.

According to the lady, she spent three days with deceased whose name she gave as Paul, before his death.

The disclosure caused pandemonium at the funeral. Watch a video from the scene below;

Saxon is a prolific writer with passion for the unusual. I believe the bizarre world is always exciting so keeping you up to date with such stories is my pleasure
Previous Man dies after falling into pot of hot porridge (video)
Next Man Opens Window To Feed Tiger, What Happens Next Is Stunning