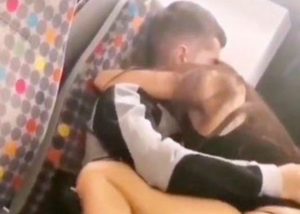 A randy pair of train passengers could not withhold their excitement and decided to start having wild, rampant sex in public.

Two very explicit videos of the couple, who look like they are aged around early 20s, were posted on social media on Saturday, October 22.

The bloke is seen enjoying himself by not moving at all, while the dark-haired female is riding “cowgirl” on him.

Strangely, the guy who posted the video appear to change sits and sit next to them for closer look – which really does not leave anything at all to the imagination.

The originator of video claims, on his Twitter account, to be from Wigan, but it is not clear if the video was taken on a train in the area – although many speculated that it could be either a Northern Rail service or one run by Scots Rail.

The identities of the couple are unknown too, but that didn’t stop Twitter users having fun at their expense.

And another jokingly posted: “Can rule it out being a Virgin Train.”

However, one asked: “Why is the train so bumpy?!

“Hope everyone was safe!”

Despite clearly having a wonderful time, the couple actually couple be breaking the law.

READ ALSO: Man with 9.5 inch p3nis rejected for a job because they ‘thought he had an erection’ (Photos)

According to the Public Order Act 1986, having sex in public areas such as in a toilet is against the law.

It could also fall foul of public decency laws as it could cause “harassment, alarm or distress to others” – although clearly not the bloke who filmed this romp.

Saxon is a prolific writer with passion for the unusual. I believe the bizarre world is always exciting so keeping you up to date with such stories is my pleasure
Previous “I died in fire and now I’m reincarnated as a boy” 5-year-old boy reveals his past life as a Black woman who died 30 years ago
Next Virginia mom charged with murder after 4-year-old son eats ‘large amount’ of THC gummies, police say