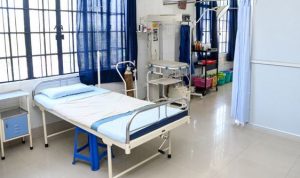 She was not ready for any form of intolerable attitude from her husband despite their excitement over a new baby’s arrival.

A woman recently kicked her husband out of the delivery room after he called her a “hormonal mess” during labour.

This post which was shared on Reddit stated that the 32-year-old new mom revealed that her husband was initially extremely supportive while she was facing painful contractions at the hospital.

Shortly after, an altercation arose between the woman and her husband after the midwife asked the couple a few routine questions about their pregnancy journey.

The first time mom said that the midwife had innocently asked if the couple were excited about the pregnancy coming to an end. “I said that yes because it’s been hard for me. My husband snorted and said ‘for me too, she was so difficult,’” the woman wrote in the social media post.

Though the midwife tried to change the topic of discussion after the woman’s husband had made the controversial remark, the woman insisted on finding out what her husband meant by that remark.

She asked her partner what he meant. “He said that he is happy it’s over and he will get his wife back and ‘the hormonal mess is over,’” she said.

The woman wrote that she was so “hurt” and asked him to leave the room which he initially refused. “I yelled at him to get the f out and he was p****d off, called me an a**hole for making him miss his kid’s birth and stormed off.” The woman also informed that her husband hadn’t been back to see his child but was expected to stop by the delivery room later that day.

Since being shared, the 32-year-old’s post drew in thousands of responses. Many internet users praised the woman for booting her husband out for his scathing comments. One user wrote, “Yeah. So many of these comments are disturbing. Even if he was just joking, she wasn’t in a good place to think it was funny.”

Another wrote, “The entitlement. It’s not about the man, the only person anyone should be worrying about is the person GIVING BIRTH. IT’S NOT A CIRCUS ACT.” “A lot of people treat labour (ie, female pain and female risk of death or disability) like some kind of consumer experience to which they are entitled, like it exists for their delectation,” wrote third.

Saxon is a prolific writer with passion for the unusual. I believe the bizarre world is always exciting so keeping you up to date with such stories is my pleasure
Previous Outrage as man allegedly brutalises his wife ( graphic photos)
Next Terrifying Video: Man Takes Nap With 2 Pythons Crawling Over Him